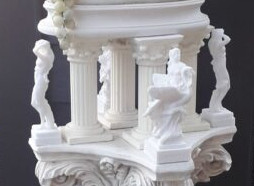 This statue synthesis is an idea and implementation of our client Leith Milson. What people can think and do is always amazing.

Leith, bought from us two statues of Goddess Aphrodite (SKU: 3-792-w) in order to make the following statue synthesis. These statues are at the left and right in front of columns.

But he didn’t stop here, he also bought a bust statue of Apollo to put it in the center of his creation and now I’m waiting new pictures.

Thank you very much Leith!

Our dear customer Leith has received the bust statue of Apollo in patina (gold) color and finished his synthesis for now. He kindly sent me new photographs:

Well done Leith, the result is fantastic! I think you may inspire other people to do so.

Some additional information about the statues used in this synthesis:

Aphrodite is an ancient Greek goddess associated with love, beauty, pleasure, passion and procreation. She was syncretized with the Roman goddess Venus. Further, Aphrodite’s major symbols include myrtles, roses, doves, sparrows, and swans. Her main festival was the Aphrodisia, which was celebrated annually in midsummer. In Laconia, Aphrodite was worshipped as a warrior goddess. Read more…

Apollo is one of the most important and complex of the Olympian deities in classical Greek and Roman religion. Also in Greek and Roman mythology. The national divinity of the Greeks, Apollo has been recognized as a god of archery, music and dance, truth and prophecy, healing and diseases, the Sun and light, poetry, and more. Moreover, He is the son of Zeus and Leto, and the twin brother of Artemis, goddess of the hunt. Read more…

Pegasus is a mythical winged divine horse, and one of the most recognized creatures in Greek mythology. Usually depicted as pure white, Pegasus is the offspring of the Olympian god Poseidon. He was foaled by the Gorgon Medusa upon her death, when the hero Perseus decapitated her. In addition, Pegasus is the brother of Chrysaor and the uncle of Geryon. Read more…